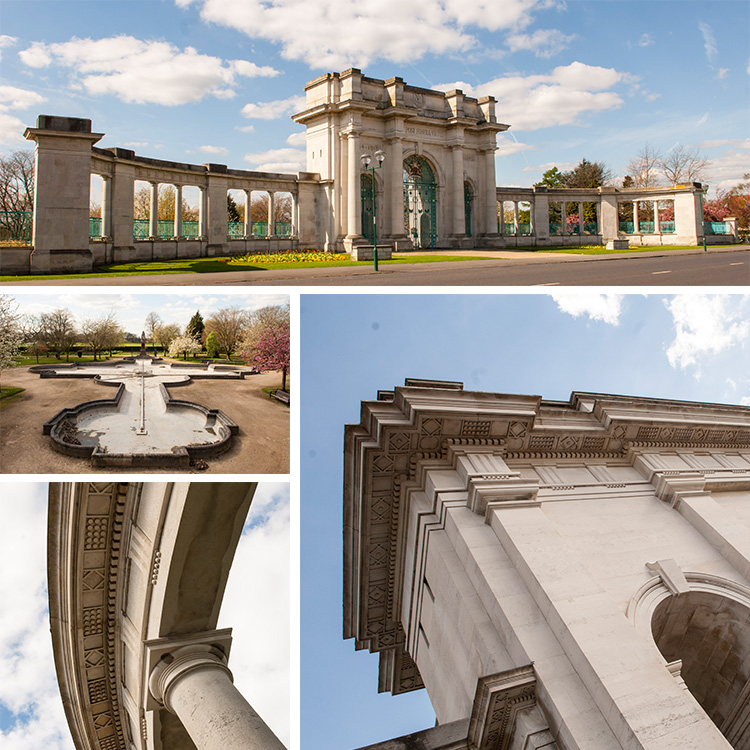 The Memorial Gardens, commemorating the dead of World War 1, are early 20th-century gardens laid out on land donated by Sir Jesse Boot. They lie on the Victoria Embankment of the River Trent and incorporate the city's war memorial in the form of an arch and terrace.The earthworks of Victoria Embankment were constructed between 1898 and 1901. The adjacent Meadows Recreation Ground was opened in May 1906. A further area of land was bought in 1920 by Sir Jesse Boot and donated to the Corporation of Nottingham to be preserved as open space and a memorial site in perpetuity. The Memorial Gardens were laid out by Mr J. Parker, the Superintendent of the Nottingham Public Parks Committee, and opened in 1927.There are two principal buildings within the garden. The classical triumphal arch known as the Memorial Arch (listed grade II). Designed by the city engineer and surveyor, Mr T Wallis Gordon, the Portland stone memorial consists of a three-span archway flanked by colonnades, with a terrace overlooking the Gardens and the River Trent. The foundation stone was laid by the Prince of Wales on 1 August 1923 and the Arch was unveiled and dedicated on Armistice Day 1927. To the south is a bandstand with terracing designed in 1937 in the Moderne style and is listed at Grade II.